Why Is Your Las Vegas Cat Behaving Aggressively? 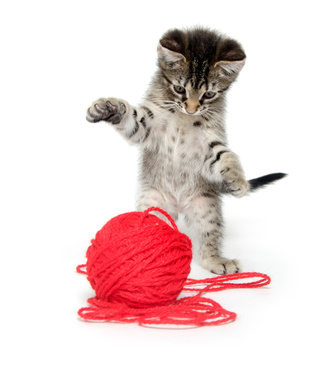 Even the most domesticated of cats can behave aggressively under certain circumstances. Health problems, frustration, anxiety, or fear can all trigger acts of feline aggression. Las Vegas pet owners whose cats bite, hiss or scratch at humans or other animals must first determine what underlying cause is behind these behavioral issues. Here at All About Cats Veterinary Hospital we have many years of experience working with feline patients, and we've developed a detailed understanding what makes cats behave with aggression.

An aggressive cat can be acting offensively or defensively. If your cat is on the offense, he may be trying to make himself appear intimidating in preparation for a fight, while a defensive cat will often aim to make himself smaller as a form of protection.

Offensive Postures Can Include:

Defensive Postures Can Include:

A cat may become aggressive for a variety of reasons, from fear or territorialism to an anger that is being redirected from one source to another. Here are some of the most common reasons your feline friend may be starting to show aggressive behaviors.

Aggressive or angry behavior that stems from fear may originate from strange sounds, an animal in the home or yard, or a new person inside the home – even a visitor. When your cat feels like he is in danger, he may continue to exhibit the aggression until he perceives that the threat has passed. In some cases, it might be best to simply avoid the animal, and let him hide if he wants to, until his instincts tell him that there is no longer a danger present.

Your cat may be territorial over your home and the surrounding area. When a new kitten reaches maturity in the home, you bring home a new pet, or you suddenly have guests around, your cat may show aggression to make it clear that they are on his turf. The cat may stalk the animal or person, or swat at him to show who is boss. Female cats can also show maternal aggression because they are territorial over their new offspring.

Redirected aggression happens when your cat sees, for instance, a stray cat in the back yard but cannot reach it. Because he cannot go on the offensive with the true prey or competitor, he will act out with your family members or other pets who are currently nearby. This type of aggression can be fairly unpredictable, and include bites or scratching. You may or may not be able to figure out what the trigger of this aggression is, as animals in the yard or other common triggers can come and go before your cat starts to act out.

When you are petting your cat on the stomach and he suddenly turns on you with biting or scratching, he may be showing irritation aggression. Cats may also be irritated by pain, so if you notice consistent anger when you touch a part of his body it's a good time for a veterinary checkup to make sure he is not suffering from injury or illness. If you are petting a cat and he becomes restless, flattens his ears, and begins rapidly flipping his tail – it may be time to give the petting a break.

Fortunately, feline aggression can sometimes be dealt with once owners understand the cause of the problem. If your cat cannot resist playing roughly, you can protect yourself by engaging him in a suspended string, bottle caps or other toys that keep his attention away from your hands and feet. Cats that react aggressively to strange humans or other pets can be gradually desensitized by introducing the newcomer in slow stages over a period of time. If you think your cat may be suffering from pain, bring him to our Las Vegas clinic for an evaluation. We can find and treat the condition in question so that you and your cat can once again live in harmony.

At All About Cats Veterinary Hospital, we love your cats and want to help you live with them in harmony. Please contact us with more questions about feline aggression triggers and solutions!

We look forward to hearing from you

Find us on the map